Spooky, atmospheric decorations are part of what makes a Halloween party so much fun. I love creating objects that my guests can pick up and examine, and that add that next level of creepiness to a display. Last year, I made a couple of spooky books and expanded on my bottle collection by experimenting with a texturizing technique using paper towels and glue. 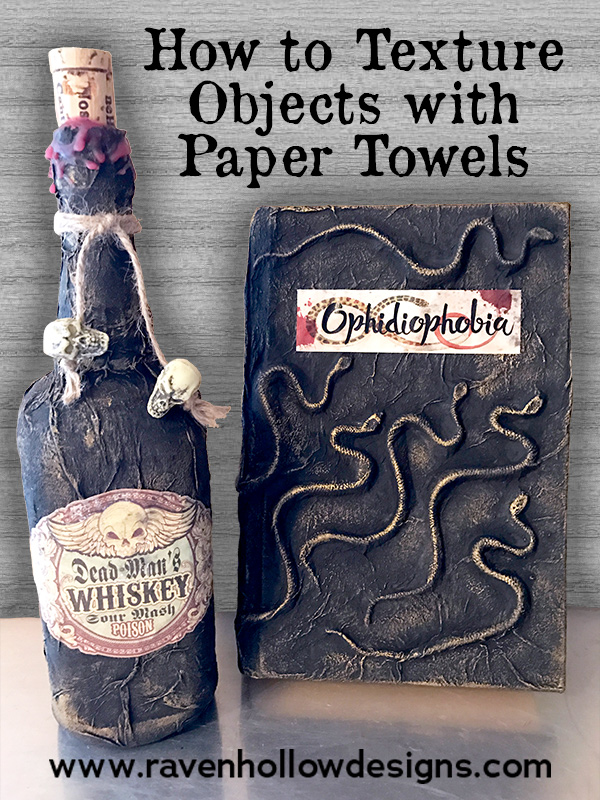 The books and bottle I created look like they are covered in an old, worn, leathery texture. They even feel old. I first saw this technique on the blog Dave Lowe Design (davelowe.blogspot.com). Dave Lowe has an amazing prop blog with lots of tutorials, you should definitely check it out. Since then, I have found other people using the technique in posts that have been shared on Pinterest. It’s pretty easy to do and has pretty dramatic results.

I started out with some old hardcover books and a bottle from the recycling bin. My first step was to hot glue small plastic snakes to the cover of the book, being sure to leave space on the front for a label. I wrapped the ends of a couple of the snakes around the spine of the book. 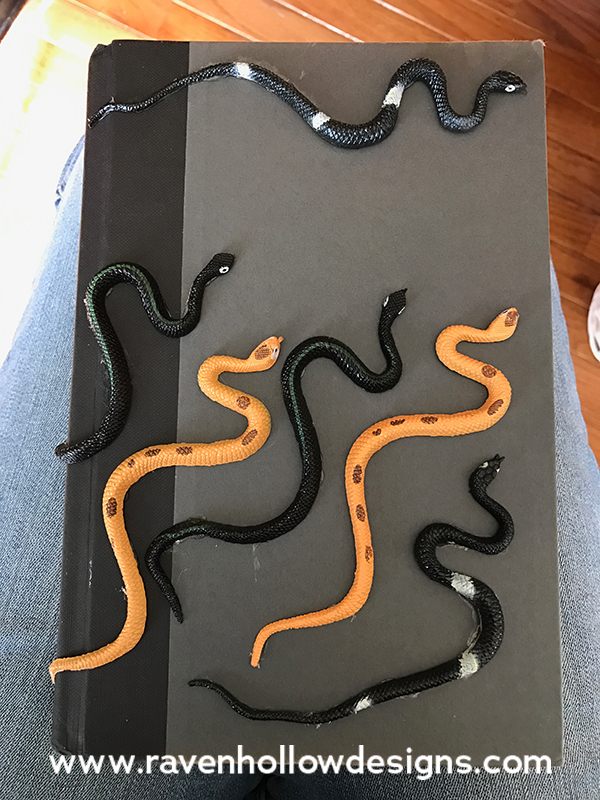 Hot glue small objects to the cover of the book

To create the leathery texture, I used Mod Podge glue and a brush, and paper towels that don’t have any quilted or embossed pattern on them. I think these are Bounty. You could use quilted paper towels but it’s possible the quilted pattern would show up when the book was finished. I don’t think it matters if there is a printed design on the paper towels, since they get covered in paint anyway. 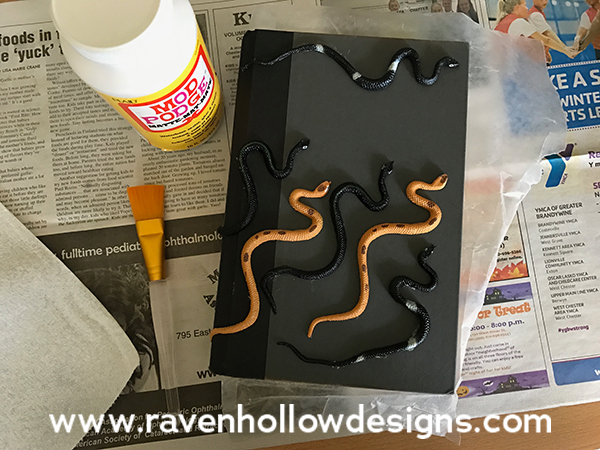 You will need paper towels, glue, and a brush

Use plenty of glue for the next step. Put a paper towel on top of the book cover and use the brush to start smudging glue directly on top. Dave Lowe recommends thinning the glue a bit with water, although I did not do this. It might have been a bit easier to move the glue around though if I had. Rather than brushing, I added the glue in dabs and smears, and moved the surface of the paper towels around a tiny bit to add wrinkles. I very carefully pushed the gluey paper towel around the snakes to bring out their dimension. If the paper towel tears a bit, you can fill in with some torn off bits and pieces. 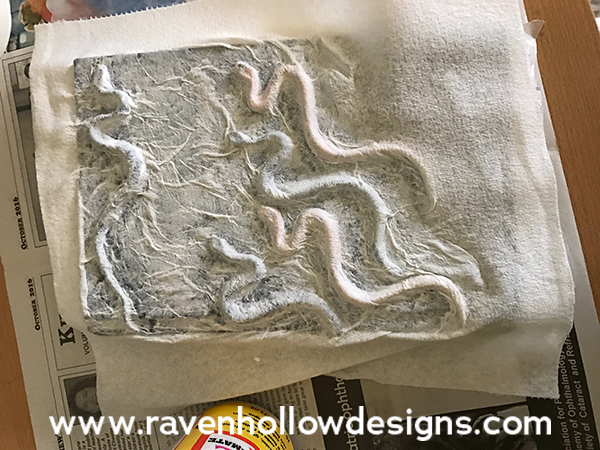 I used a second paper towel to do the back of the book and wrapped the edges to the inside of the covers. 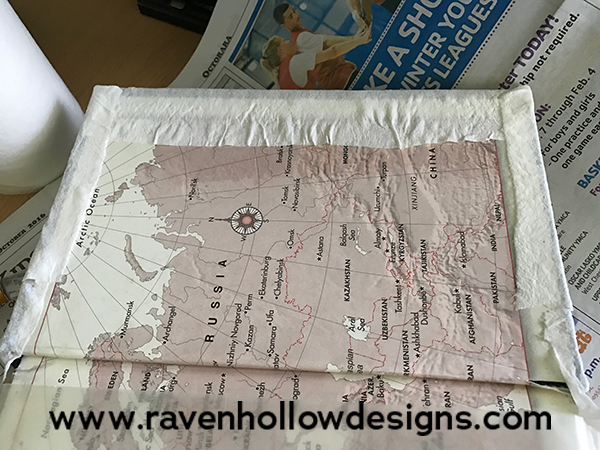 I used the same technique to cover a glass bottle and it worked just as well. When the glue dries, it looks somewhat clear. 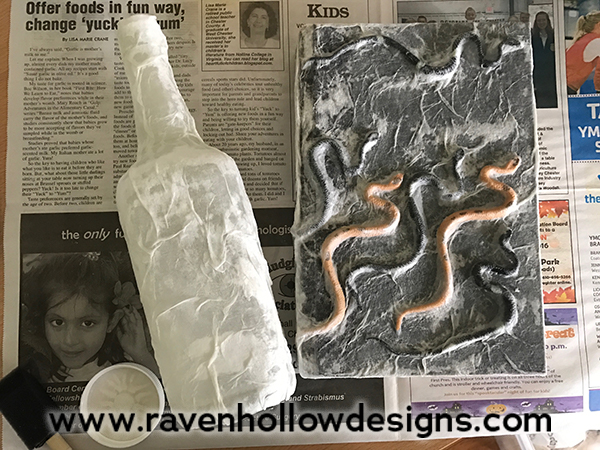 Covered objects after the glue and paper towels have dried

I then gave the books and bottle a couple of coats of black acrylic paint. After that was dry, I used a metallic paint in very tiny amounts to highlight the raised areas. Use a brush or finger to lightly smear the paint on the rough parts. 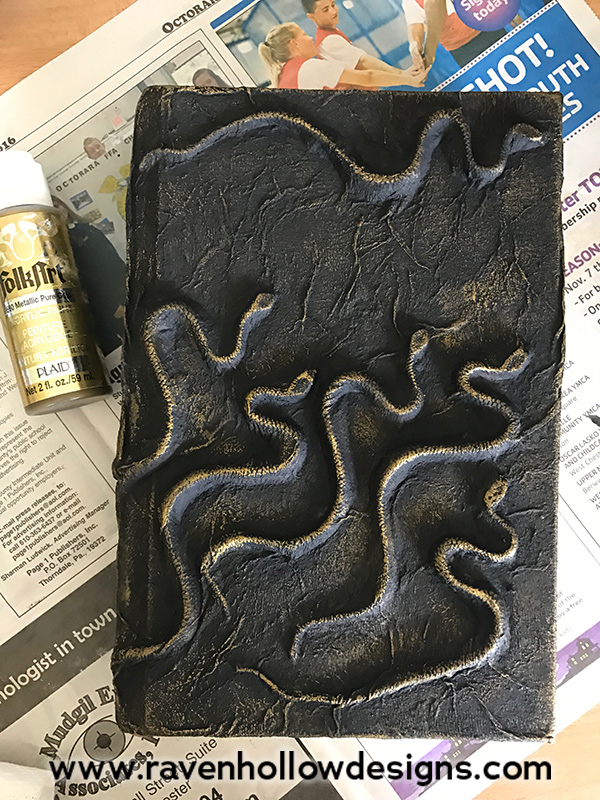 The final step was to design and print some labels and glue them on with Mod Podge. I lightly added a layer of Mod Podge to the top of the labels as well. I also added some extra embellishments to the bottle. 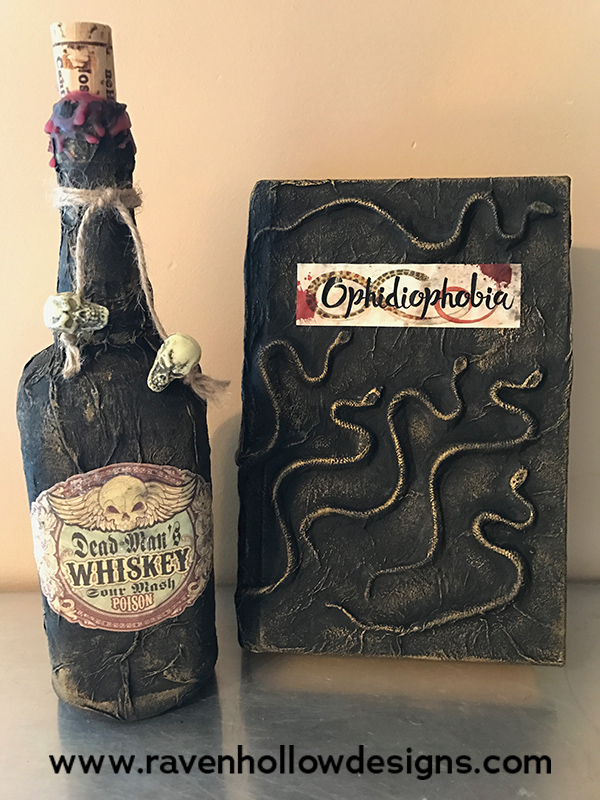 Here is a second book I created using a large plastic spider. 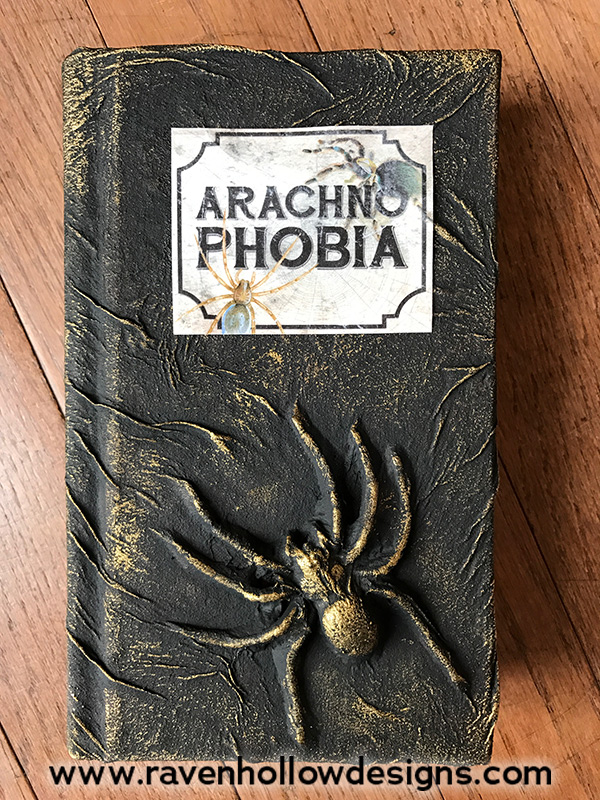 These books look great in my display with my potion bottles. Try it and see what you come up with!

My name is Pam and this is my virtual studio for Halloween DIY ideas, projects and design. Enjoy!